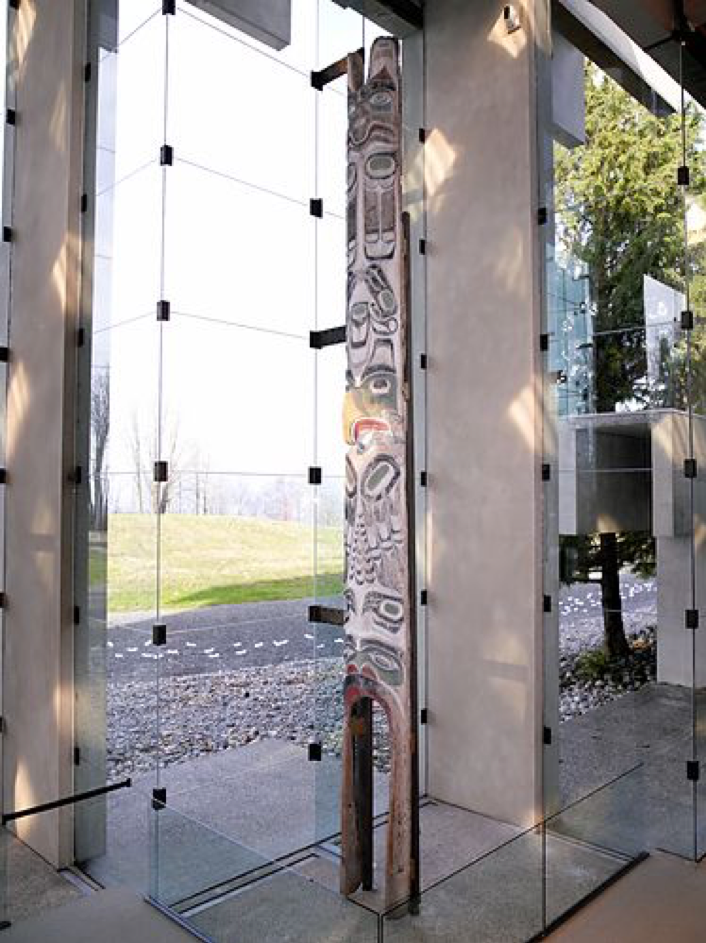 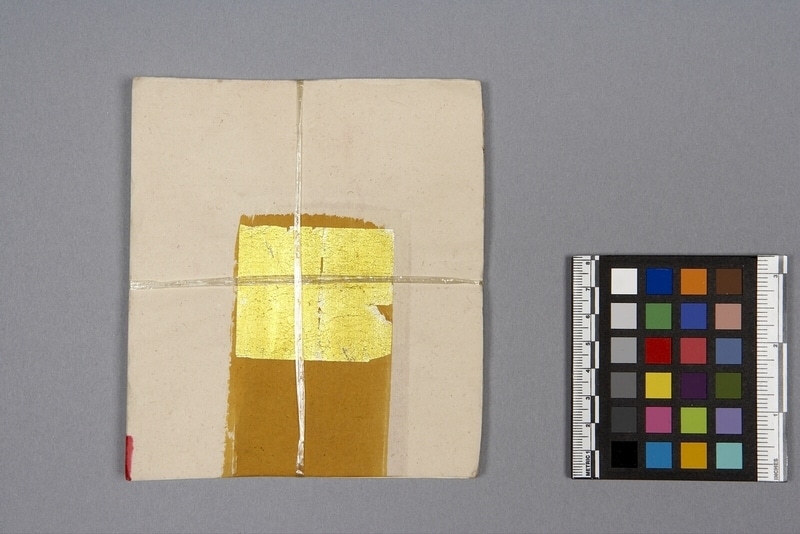 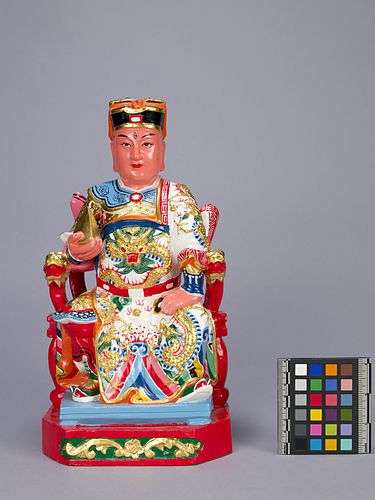 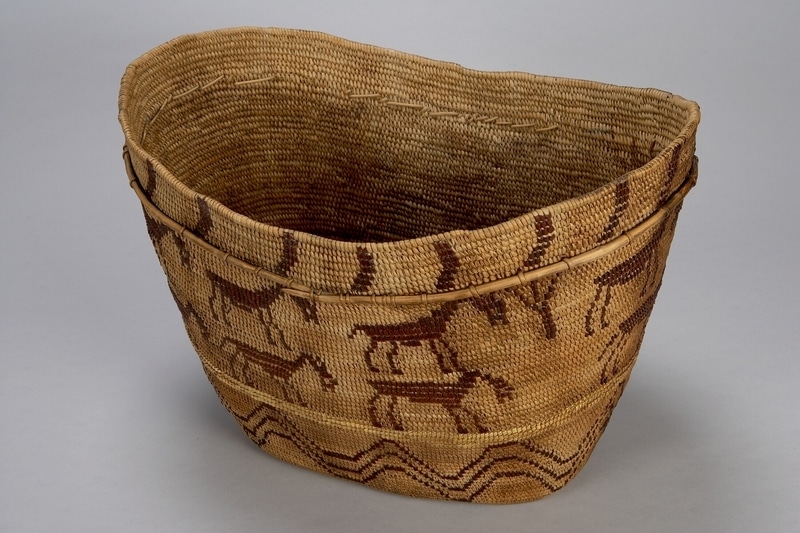 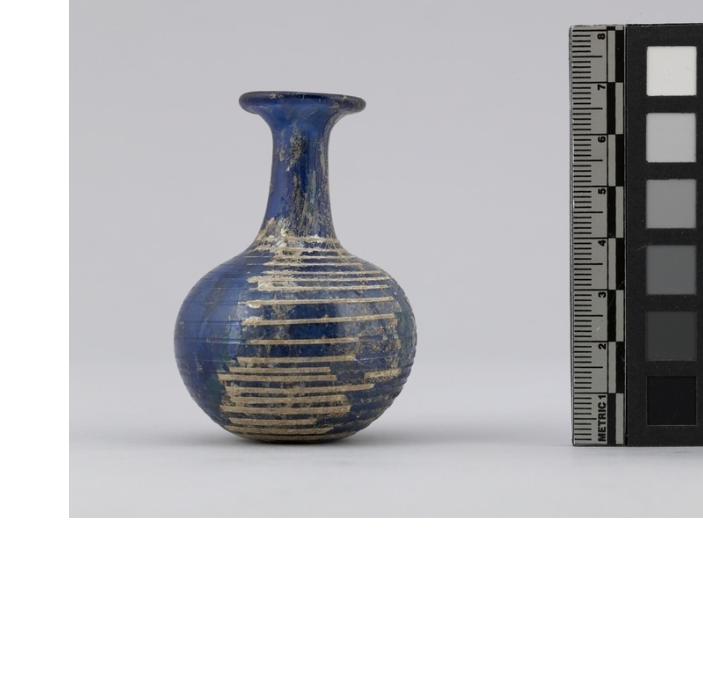 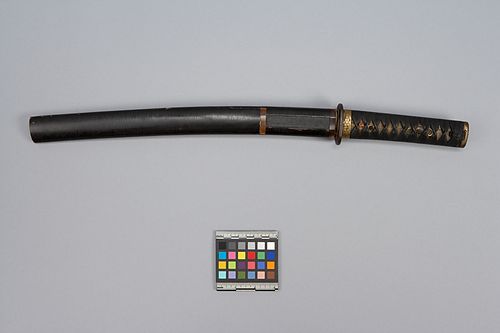 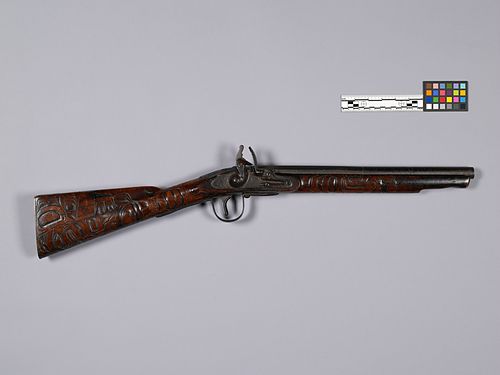 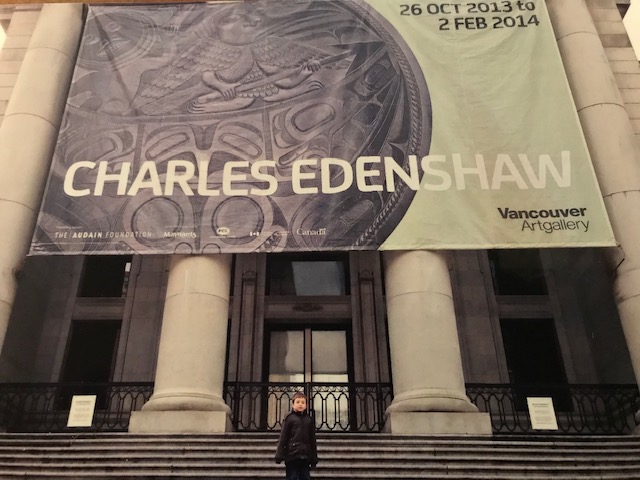 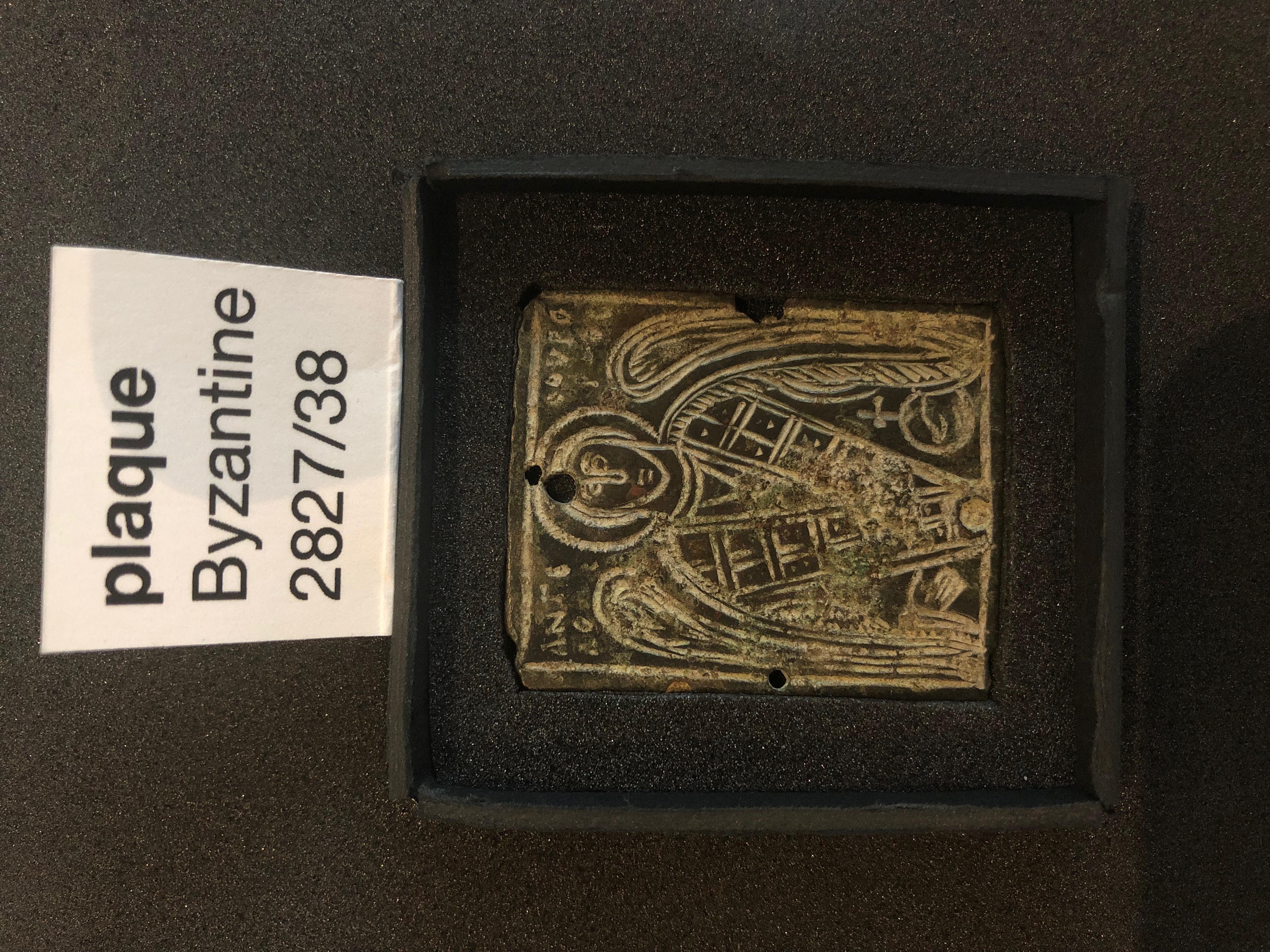 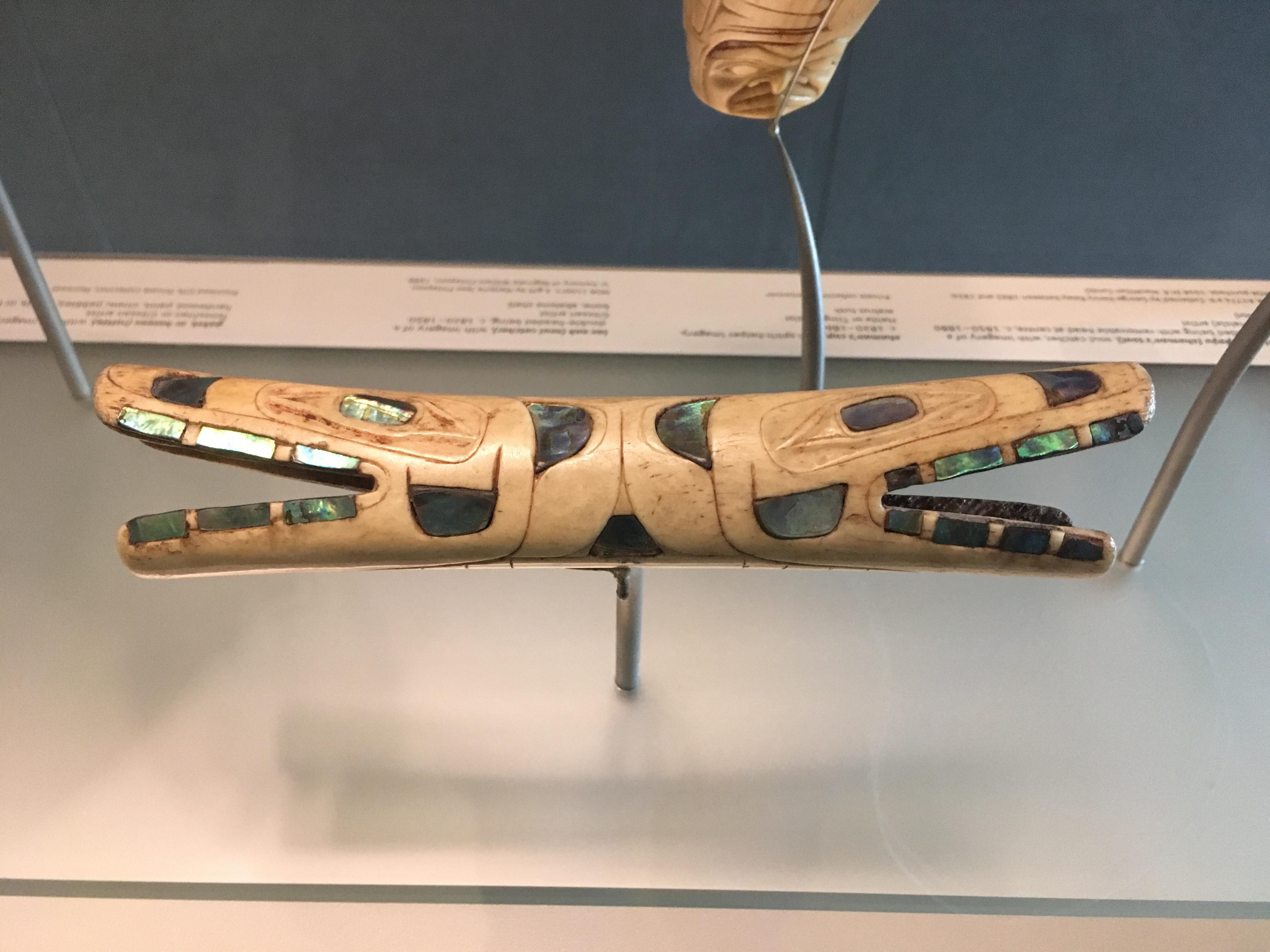 Object of Choice Assignment for ANTH 241

An investigation into Delftware as evidence of the transmission of culture, and a focused analysis on Edward Ward's 18th century piece titled "The Garden of Eden, Adam and Eve." 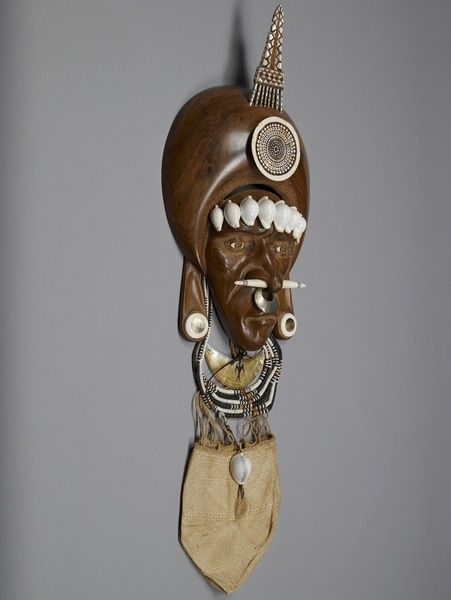 For this assignment, I’ve selected a Mask from the Solomon Islands made for the Museum of Anthropology by Frank Haiku in 1991 (1). Frank Haiku is a Solomon Island local who came to MOA on a fellowship to work with art among First Nations. During this time, he constructed the mask, incorporating many details and attributes of Solomon Island art into his work. Immediately after I came across the mask, I knew I wanted to base this project around it. While walking through MOA there are no doubt thousands of beautiful items on display. Between the ‘secret’ drawers at the base of most showcases, the showcases themselves, and the installations throughout the halls. But while walking through the MOA this time, I found myself in awe of this mask.

At first look, I noticed a lot of things. Firstly, the mask is very big – at least compared to other masks I’ve seen. The top starts with a large decorated headdress with a comb-looking object projecting out of it and underneath there is a circular disk made of turtle shell. There is a row of eight white shells along the forehead. The carvings of the face look life-like due to white shell fragments being placed around the pupils. Placed between the nose is a large white object with a smaller circular metal ornament handing below it. Symmetrical ears hang alongside the face with ‘spacer’ earrings made from shell. Below the chin hangs a bead necklace that carries a woven basket. If someone were to actually wear this, the bottom would probably reach mid-chest considering the overall diameters measuring 74 cm long by 51cm wide (1), which I’d also imagine makes it very heavy. Secondly, being made of wood, it has an incredibly rich colour to it that has darker tones marbling throughout. The finish is smooth like it was stained with wood paint. A majority of what’s seen is wood, however, the contrast between the white shells and brown wood is captivating, tied in with the pops of colour from the beaded necklace and woven basket, it was easy to look at and read about for an hour.

Aesthetics are no doubt pleasing to the eye however, reading further into the specific materials used for this mask gave me a deeper appreciation for it. For example, MOA CAT provides that the shells found on this mask came from a variety of species such as clam, turtles, snails, oysters, and nautilus! (1) Having such a variety of shells used, among other materials found on the mask, shows a significance to the item. Why gather different types of shells, put in so much thought and time into something insignificant? To be able to see and appreciate the thought and effort that goes into making an item like this adds to the appreciation.

The context of the display it’s in also adds to the aesthetic appeal or interest. For example, the items sharing a case with the mask are much smaller in comparison. The mask kind of takes away the show in this case, which no doubt draw attention to it. Perhaps if it was hung besides five other incredibly beautiful masks, I wouldn’t have chosen this one. Instead, the case is full of smaller ornaments found in the Solomon Islands such as necklaces, a Barava, containers and a comb where the (immediate) attention is drawn to the large hanging mask.
The area the mask was found in generally contains other objects found from the Solomon Islands. Underneath the case it’s hung in I found a drawer of combs commonly traded among the Solomon Islands. In the drawer, there is a note with a bit of history about the combs, and after reading it I noticed perhaps the item projecting from the headdress is maybe a comb!

Biography of the item
The Solomon Islands is made up of 6 major islands, totalling up to 992 with the smaller family islands. Since the Solomon Islands consists of a lot is dispersed space, art throughout the Islands tend to vary in style, materials and techniques used, aesthetic and cultural significance. While masks are not particularly common objects found among the Islands, the islands of Roviana and Marovo are said to have the highest production of art throughout. (2) Art within the islands can generally be characterized by the repeated use of shells (particularly white), whether it be on masks or other objects. Traditionally these objects were used to signify status but were also used during ritual practices such as funerals. Pendants like the one you see on this mask generally signified high status as they were made from precious materials like turtle or clamshells. (3)
Unfortunately, as I learned, masks weren’t commonly made throughout the Solomon Islands, and if they were, they only came from the most Northernmost Islands such as Nissan, Buka and Bougainville. (4) This makes masks from the Solomon Islands very rare, which limits the knowledge we have on them. Fortunately, the MET obtained a mask found in Bougainville that was made sometime between the late nineteenth and early twentieth century which resembles an ‘evil spirit’. (4) It’s said that masks containing weapons or like-objects represent Kokorra, an evil spirit. This supports the claim that these masks were generally used for ceremonial rituals. 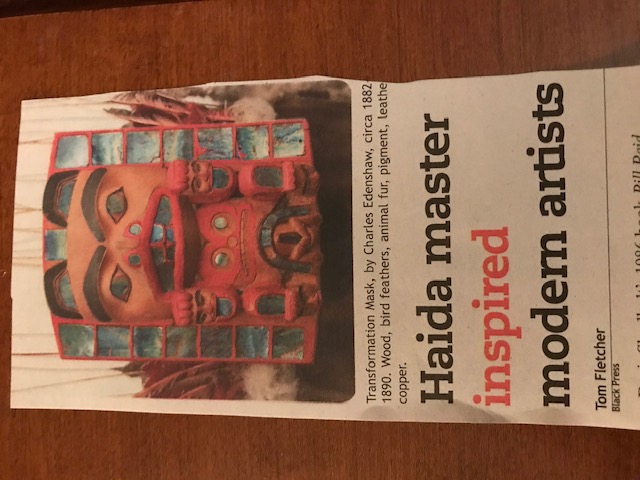 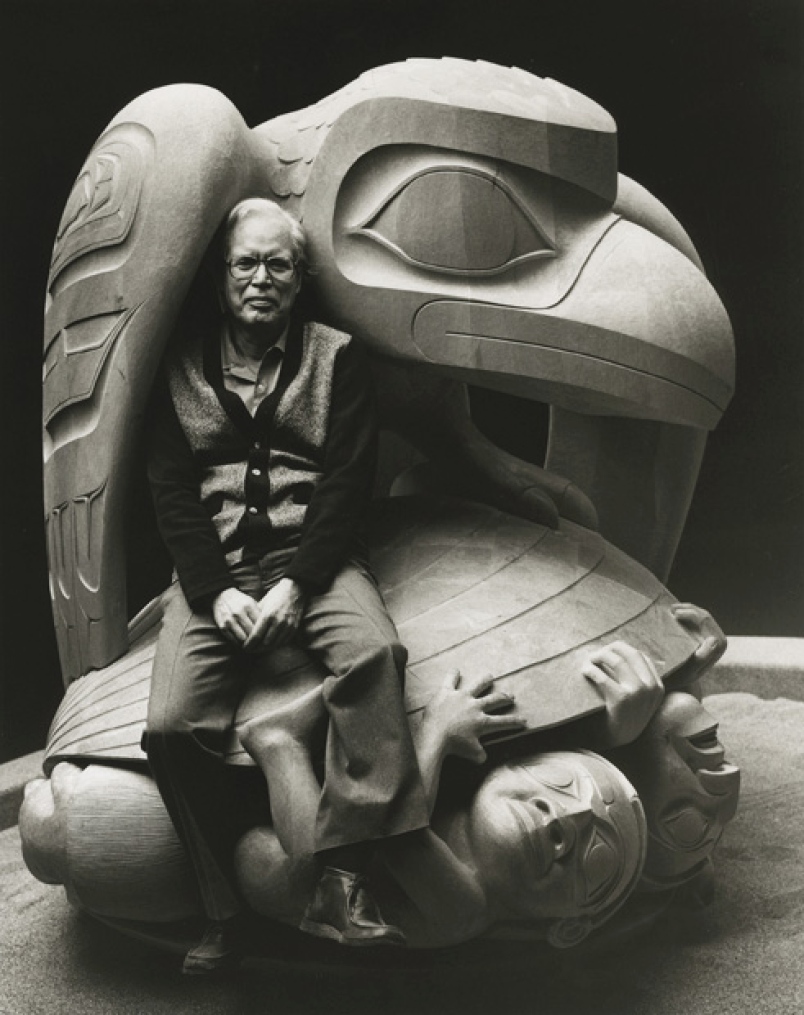 Through this assignment, I aim to cover the context of display, the biography of the object, its aesthetics, and techniques. This essay will also provide information about the artist and the process of creating the artwork. 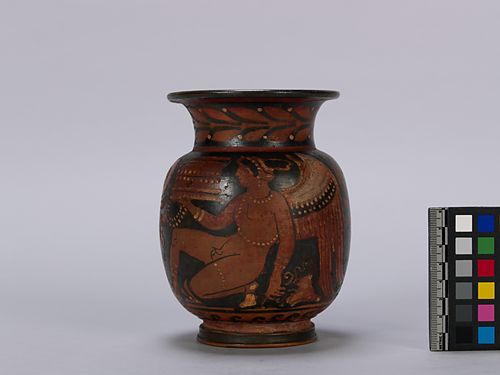 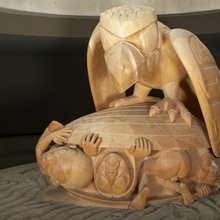 Selecting Bill Reid’s, ‘The Raven and the First Men’
I selected ‘The Raven and the First Men’ because I love the story it tells. The object is quite big, and I find its largeness to be compelling, every time I visit the Museum of Anthropology (MOA) my attention is always drawn to it. The yellow-like, wooden sculpture of a raven perched on top of a clam shell, has humans creeping out of it; one may perceive the humans to be creeping out of the shell, to be the first people on earth. The objects shape is round, with many Indigenous artistry carvings on it, such as the symbolism on the wings of the raven that look like fish; I perceive the fish to resemble salmon. Very strong cultural implications of Indigenous culture are portrayed through the assembly of the object itself; the raven is a very well-known character in many Indigenous cultures, often known as the ‘trickster.’ The notion of the ‘trickster,’ relates back to my desire to choose this specific art form; I love and enjoy the stories that exemplify a larger meaning that plays a role in everyday life.
Context of Display in the Museum of Anthropology
The placement of Reid’s sculpture is on a circular stage-like figure that is cushioned, in the centre of the ‘Bill Reid Rotunda’ room. The circular stage-like figure has a circular skylight that feeds natural light to the object on display. While ‘The Raven and the First Men’ are the center piece in the Rotunda room, there are other forms of Reid’s work that are placed around the room as well. The Rotunda room presents many forms of interpretive media; there are object labels with descriptions for all art pieces done by Reid. The most exciting feature in the Rotunda room, is the two red chairs that provide an intimate story of the “The Raven Discovering Mankind in a Clamshell” told by Bill Reid himself. Once you sit in one of the two red chairs, the audio clip begins to play, providing a space of sound that captures the essence of Reid’s art piece. The audio play makes the observer feel connected to the story of the art structure, as if you are sitting there with Bill Reid himself while he tells you the story. The Bill Reid Rotunda room functions as an atmosphere room that creates a space of experience with such placement and lighting. The atmosphere in the Rotunda room navigates visitors through the architectural impressions of Reid’s center piece ‘The Raven and the First Men.’ The Rotunda room is culturally constructed; therefore, it is creating an atmosphere filled with the reality and impression of Haida culture. The concept of multiversity in the Rotunda room emphasizes the cultural differences in communities, values, and classifications.
Biography of Bill Reid
According to About Bill Reid, Bill Reid was born in 1920 and passed in 1998; he was renowned as a “master goldsmith, carver, sculptor, writer, broadcaster, mentor and community activist” [1]. Many of his works can be found in MOA in the Bill Reid Rotunda room, as described in context of display section. It is immensely important to now introduce Reid’s ancestral role in the makings of his work; Reid’s mother is Haida, and “he only began exploring his Haida roots at the age of 23” [1]. Once Reid’s awareness of his cultural ancestry was discovered “at the age of 23” [1], his adventure began in the creation of his many forms of Indigenous artwork that captured the public’s eye. Reid’s engagement and collaborative work amongst others, aspired to bridge the gap between Indigenous people and those who were non-Indigenous. Carol Sheenan illustrates in The Canadian Encyclopedia, Reid’s journey “late in life, [as] a CBC broadcaster, he studied jewellery and engraving at Ryerson Institute, Toronto (1948), and began investigating the arts of the Haida in 1951” [2]. Once Reid shifted towards the craft of Haida culture, his many accomplishments led him to awards such as, “an honorary doctorate from UBC in 1976, the Molson Prize in 1977 and the Lifetime Achievement Award, National Aboriginal Achievement Awards, sponsored by the Canadian Native Arts Foundation in 1994” [2].
Bill Reid “created more than 1500 art works in his lifetime,” according to the Spirits of the West Coast Art Gallery [3]. The copious amounts of artwork that Reid had produced in his life span (some being alongside other artists), exemplifies his role as an artist and the impact he has made in the overarching sense of communities that have been built during the process of his work. The striving force of community building during the process of Reid’s art, is supported by the importance of forming relationships between Indigenous and non-Indigenous peoples. In particular, ‘The Raven and the First Men’ sculpture took “two years to complete [and] was worked on by a number of Northwest Coast Native Artists in conjunction with Bill Reid” [3]. Reid’s coordination with other Indigenous artists forms a place of learning and collaboration that perpetuates connection and intimacy in his art pieces that are displayed or shared with scholars, the public, and many other forms of shared recognition.
Object Type and Cultural Context
As I previously stated, one of the many incentives that drew me to choose ‘The Raven and The First Men’ was the dominant Raven figure in Reid’s sculpture. I am fairly familiar with the figure of the Raven in the Indigenous context and I find the role of the trickster to be intriguing and fun. The Bill Reid Foundation describes ‘The Raven and the First Men’ structure as: “In Haida culture, the Raven is the most powerful of mythical creatures. His appetites include, lust, curiosity, and an irrepressible desire to interfere and change things, and to play tricks on the world and its creatures.” [4]. An interesting element of the Raven figure that Reid made so prominent in his structure, is the that “through [Reid’s] mother, he was a member of the Raven clan from T’aanuu,” [1] therefore this attribute of the Raven figure lies very closely to Reid and his Haida culture. 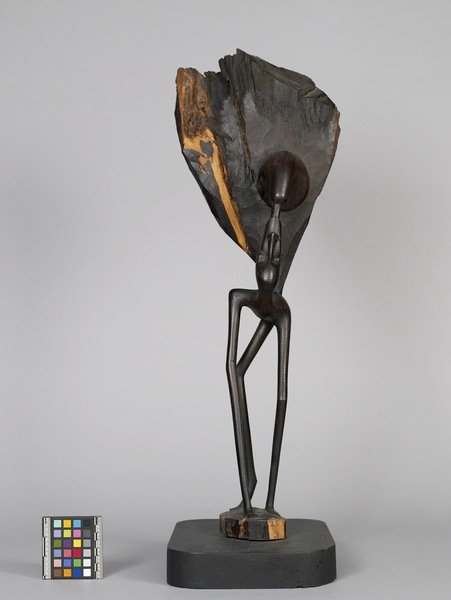 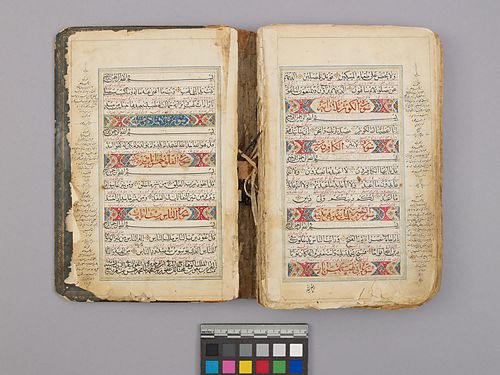 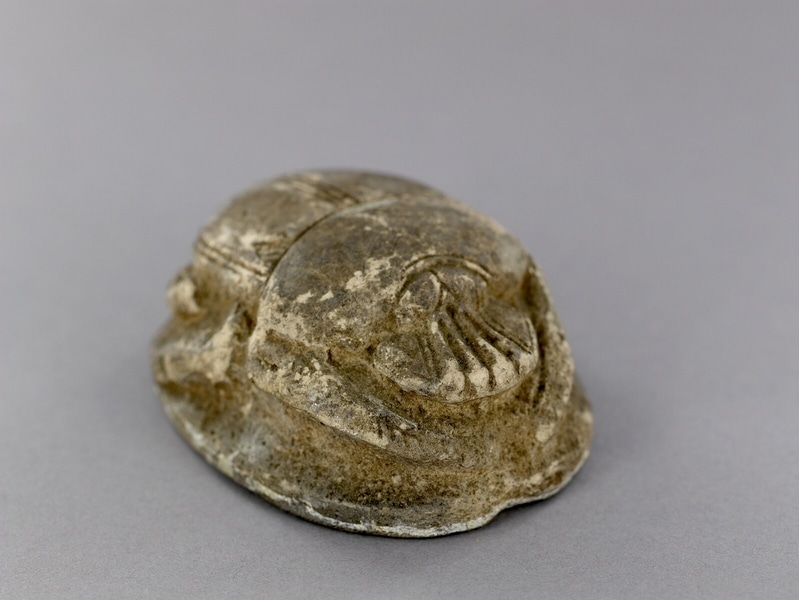